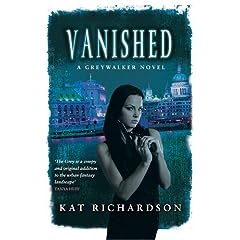 It took me quite a while to get through this book and not for the usual reasons of bad writing or plot problems.  Simply the fact it was book 4 in a series I haven’t come across before, and there were a lot of references to past events that I didn’t understand.  I did try holding off until I could get the previous three but finances intervened, and I decided to just go ahead and read it anyway.  It became much less of a problem the further I got through and started understanding more of what was going on and how the protagonist Harper Blaine became what she was, a Greywalker.

Greywalkers are people who have died for just a few minutes and come back with the ability to see and interact with the ‘Grey’, the spiritworld inhabited by not just ghosts of people but buildings, different time periods and even otherworldly creatures.  Things and items that have a touch of ‘Grey’ to them have a gleam which can attract a Greywalker and then use their other sight to examine them, often learning a lot but not always what you want to know.  You can empathise a lot with Harper as she experiences several revelations about who she is and where she came from.  Most of them not good.

In spite of the problems I had with the references, I really enjoyed the book, the plot was twisty and very cleverly done and I have the feeling it has been a long running setup to this point from the other novels.  You cared about Harper Blaine very quickly and felt sorry for how chaotic her life had become.  I didn’t anticipate some of the twists which is always a nice surprise and the character writing was really well done.  Also at each turn, the author had Harper react as you would imagine a real person would, rather than writing a larger than life character that is apparently omnipotent but when it comes to the crunch, something always gets in the way.

One thing I have to touch on is the research Kat Richardson obviously did for this novel.  She lives in the US where the series is also set but for plot reasons, Harper has to go to London to sort some things out.  Some authors will fake it, have some things accurate that they could look up and gloss over the parts they can’t, but you really got a feel for the Greywalker London and you can read about how she achieved that after the story finishes at the end of the book.  That she visited most of the places she wrote into the book, and adapted other parts to fit with London’s history, I really have nothing but respect for her.

As soon as finances permit I will definately be getting the first three!

I'm a complete bookaholic and never want a cure... more shelf space maybe. The only things I love more than reading is my husband and my cats! View all posts by Grete